First catch your hippopotamus, or a python

Had a great day on Friday - Brian and I met up with Ken and Babs at RHS Wisley Gardens for the annual flower show and plant sales. The weather was good - not too hot, and we had a lovely time looking around the new glasshouse and then the plant sales. 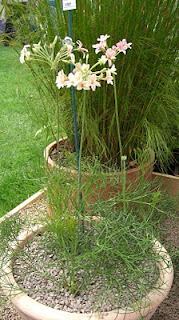 We spotted Pelargonium luridum on the display of one of the plant stands. Luridum is from the Latin 'luridus' meaning smoky, or drab and in this case refers to the colour of the flowers. I would hardly call this one drab! It is a most beautiful and delicate peach/pink colour. However, in its native Africa, the colour can vary from white to pink, yellow to greenish-yellow and even red flowers have been recorded in Mozambique and Angola. It is a remarkable plant in that the leaf shape varies on the plant as it grows. At the beginning of the season the leaves are shallowly lobed - successive leaves become larger with narrower segments. This can be seen in the second photograph. The plant grows from a woody subterranean tuber and is found widely growing in damp grass veld in South Africa and also in Lesotho Swaziland, Angola, Zimbabwe, Zambia, D.R.Congo and Tanzania.

Apparently the Zulu people use an infusion of the roots of P. luridum as a cure for diarrhoea.  They also treat dysentry by mixing the dried and powdered root in porridge, or other food.  Young Zulu men rub a mixture of the root powder and fat of hippopotamus or python on their faces to charm the opposite sex.

Both Ken and I were tempted to purchase one of these from the stand (not for the reasons in the last papragraph I hasten to add!), but they only had one and it was not a very good plant so we have decided to see if we can obtain some seed. I hope we can get one this same colour. It was certainly eye catching.

We had to leave Ken and Babs early afternoon because Brian and I were looking after two of our granddaughters after school - they stayed for supper and it was lovely to spend some time with them on their own.

On Saturday we had lunch with Brian's cousin Sue and her husband Malcolm and Sue and Brian's cousin John and his wife Maureen who have been here on holday from Australia. It was their last day so good to spend some time with them. Thank you Sue for a lovely lunch. Sue's family were over in the afternoon so we were quite a crowd. Fortunately the children were all able to play outside. Mary, 3 years old, was telling me that she had new shoes on which she had chosen hereself. I told her they were very smart and that she had good taste. She looked very serious and explained quietly to me that they were not for eating. Silly me!