A Black Knight and a barrel of fish.

﻿
﻿The Pelargonium Register lists four 'Black Knight's, three zonals and this one, which is listed as a Regal.   It is a small regal and usually sold as an Angel.  It has small typically regal-type leaves of green with serrated edges and the flowers are a purple-pink with a white 'eye' and white edges to the petals.  It is an old variety and was first catalogued in 1951.  I love the colour combination of the bright green leaves and the flower colours.   Like all Regals and Angels, it is prone to white fly, and this one more than the others I find.

I recently wrote about the pond in my garden, and we are still not quite decided on what we should do with it.  We thought that the ducks had finished off the remaining two fish we had seen, but over the weekend I spotted the sarrassa comet, so hopefully the ghost koi is still there as well.

But we don't just have fish in the pond.  When I was visiting my family in Australia several years ago I was very impressed with a wooden half barrel planted up with water lilies and water iris, plus two or three goldfish.   When my sister and her husband came to visit me a year or two later they bought one for me as a gift before they left for home.  I planted it up with a miniature water lily and variegated iris and three goldfish.  The barrel never seemed able to support three goldfish, always called Freeman, Hardy and Willis, so we usually just had Hardy and Willis. We bought a liner for the original barrel because for some reason it always leaked, but sadly last year the barrel rotted away.

I rather like my barrel of fish and we intended to get another wooden barrel.  However, they were either very pricey, or did not have a good appearance, being intended for planting up.   But, last summer we spotted a black plastic half-barrel, deeper than the original wooden one, which we thought would do.  I planted it up again and we bought another Freeman, Hardy and Willis.  Knowing the plastic barrel would not be as insulated as the wooden one I wrapped bubble wrap around the outside of the the black plastic and during the really cold spells I also covered it over with bubble wrap. 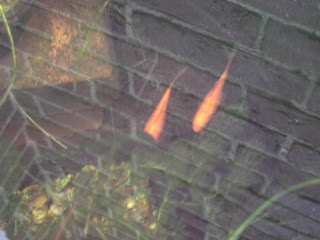 My efforts seem to have paid off - Freeman, Hardy and Willis are all doing well.  The variegated iris is beginning to shoot and the water lily is reaching for the top of the water.   Here you see Freeman and Hardy - Willis is rather shy.    So far the barrel, which is deeper than the original, is supporting the fish.  Of course, we will have to remove one if they get too big.

This is really a lovely feature for a patio - the grandchildren love it as they can see the fish close up and after a while they tend to become quite tame and will come to the top to be fed.
Posted by Gwen at 21:31 5 comments: 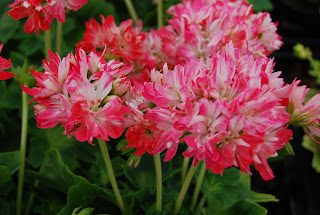 Butterfly Brian West
﻿﻿﻿﻿﻿
﻿﻿﻿﻿﻿
Butterfly Brian West is a dwarf stellar type pelargonium and is a sport found by Andrew Simmons on his miniature silver leaf stellar that he had named for Brian West.  The growth habbit of this plant is much stronger, but it does have the same beautiful double blooms of dark pink fading to a white eye.   The butterfly in the name refers to the butterfly shaped pale blotch in the centre of the leaf.   The plant is sometimes referred to as Brian West Butterfly.
We have a small pond in our garden and last September on our return from France we found a heron helping itself to a rather expensive fish snack.  It was our fault as we had forgotten to make sure the cane and net cover was completely over the pond before we left.  Fearing that there were no more fish left as the heron had had a fortnight of snacking we decided that we would leave the pond and give it a good clear out in the summer.  We were surprised to notice a couple of weeks ago that there are still two fish left - at least there were.  Yesterday we found this pair of mallards swimming and diving on the pond.  We usually do have a pair visit us each spring. They fly in from the village pond, and they never stay long, just long enough for a stroll around the lawn and borders and then they fly off. 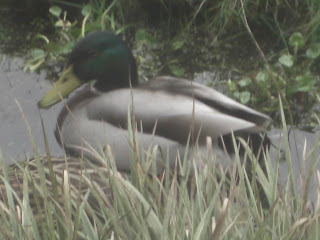 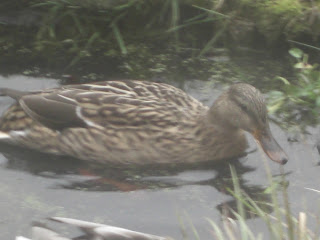 The shy pelargonium - and a lesson to be learned.

A pelargonium for Valentine's Day 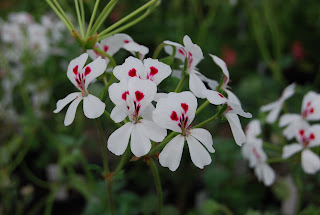 A sure sign spring is on the way - it was good to spot these in flower.  I also spotted Cyclamen coum and a Pulmonaria in flower, but the sun had gone in so too dark to take a photograph. 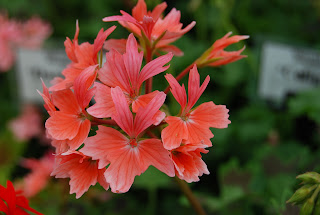 Stellar Pelargonium Chinese Cactus
Since today is the start of the Chinese New Year  (the year of the Rabbit of you are interested), I thought I would write about the Stellar Pelargonium Chinese Cactus.  This is the pelargonium that Ted Both of Adelaide, South Australia, used in his crossings to develop the stellar pelargoniums we know today.   Where this plant came from is a mystery. No one knows how it got to Australia, or where it came from. It appeared in Australia around 1950 and was known as Chinese Cactus, Fiery Chief, and also Sunstar. The leaves and flowers are quite unlike the usual zonal pelargonium that were known then.  The leaves of Chinese Cactus have the same dark zone that many zonal pelargoniums have, but the leaves are deeply indented.  The single pink flowers are also very different from the normal zonal flower having two very narrow top petals and three narrow lower petals which are serrated.

Ted Both crossed this plant with a large number of zonals to produce the stellar pelargoniums that we know today.   He though that this plant resembled P.staphysagroides, and called his new hybrids 'Staphs'   However, it has since been proved that Chinese Cactus is not P. staphysagroides.
In Australia these hybrids are still called Staphs, but here and in other parts of the world they are known as Stellars, for the star shaped leaves.
﻿﻿﻿﻿﻿﻿
﻿Continuing the Chinese theme:-﻿﻿﻿
﻿﻿ ﻿﻿﻿
﻿﻿﻿
Posted by Gwen at 22:12 2 comments:

Ashfield Serenade - and a bargain book