Miniature zonal pelargonium raised by David Taylor and released in 2010.  Deep lavender pink double flowers.   A strong growing miniature  with green leaves that have a thin bronze zone.   This was named for David’s mother in-law, Gillian Martin.  David says this would make a good show plant.

There is not a lot to do in the greenhouses just now.  The weather has been bitterly cold for the past week with 24 hours frosts.  The garden is beginning to look as if it has had a sprinkling of snow.    The plants are covered over with fleece in one greenhouse which seems to be in a colder part of the garden.   Heaters are on late afternoon or early evening.   I am keeping the plants very dry just now, even the potted on cuttings.
Posted by Gwen at 16:54 4 comments:

This beautiful zonal pelargonium was first listed in the Australian Gardening Magazine "Australian Garden Lover" Vol. 36 in 1958.  The flowers are single and a delicate white flushed with pale pink. The leaves are mid green with no zone.

I am still lighting heaters most nights, and covering plans over with fleece.

This is a perfect time to browse the specialist nursery catalogues.   Many of them have good websites and are easy to navigate and order from. I have a list of the current ones which do mail order on one of the pages above.
Posted by Gwen at 21:39 1 comment: 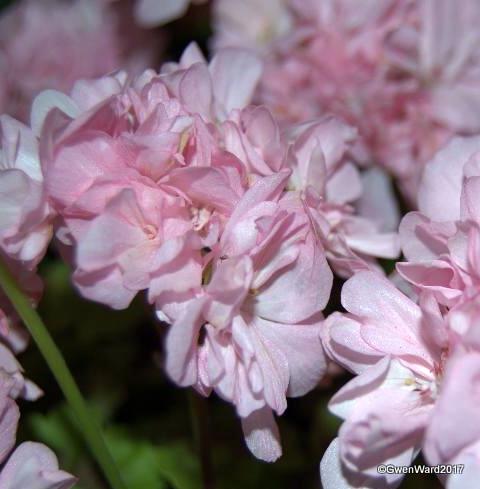 The dwarf zonal pelargonium "Bembridge", has pretty soft pink double flowers above zoned gold foliage.   It has a spreading growth habit.   Raised by the late Brian West (IoW, UK) and introduced before 1991.

Bembridge is a small village on the Isle of Wight.  Brian often used the names of local villages for his raisings.

It's a fairly quiet time in the greenhouses now.  We have had some heavy frosts and I have had heaters on over night and a couple of nights also covered the plants with fleece for extra protection.

January is a good time to sow pelargonium seeds to give the plants a chance of flowering this year.