A  most unusual Angel Pelargonium, Eskay Verglo was hybridised by Des Glover and introduced in 2006.  I love the veined lower petals with the plainer upper two petals. The crinkley leaves look a bit like parsley, and it does seem to like to be watered more often.

Pride of place in my house at this time of year has to go to my Paphiopedilum Orchid.    I found this plant on the bargain shelf at a garden centre two years ago.  It had one dead flower and green leaves.   I can never resist a poorly plant in a garden centre if the price is knocked down, and I paid just £2.00 for the 'dead' orchid..   Today it is flowering for the second time and has two flowers.   I understand if it is re-potted each year it will produce one more flower than the previous year.   I saw one a week ago in a garden centre with two flowers priced at £14.99 - wasn't I lucky? 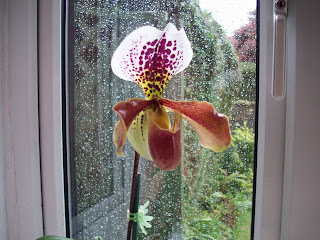