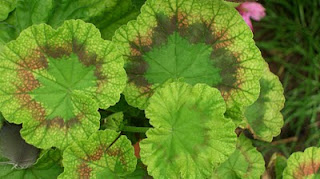 Warrain growing outside
My pictures today are of a basic zonal named Warrain.  I first saw this beautiful plant at the South Australian Pelargonium Society Annual show in Adelaide about four years ago when I was visiting my family there.   I made a note of the name it was shown under - Warrancy - and decided that I would check it out when I got home.   After much searching I found it's proper name is Warrain.   It is an Australian bred plant, and was introduced in 1989 by Georyl Pelargoniums, Victoria, Australia.  I have been in contact with Beryl Stockton, owner of Georyl Pelargoniums and she does not know where it came from.  What I  have discovered is that there is a town named Warrain near Melbourne, so maybe someone named it after a place of significance for them.  To further confuse matters, I found the plant is available here in the UK with either the name Warrin, or Warrion.   However, I can confirm that it is definitely named Warrain.  I love this plant!  It has gorgeous pretty mauve pink semi double flowers.  The leaves are a beautiful lime green with a darker zone.  I have been growing this in a pot outside this summer and it is stunning!   The light has made the leaves really bright, the dark zone has become a reddish colour and the whole sets off the flowers wonderfully.    I have also been picking the flowers and putting them in a small vase indoors and they last for ages.
Pots - lots of dirty ones!   They have accumulated over the summer and, as can I see that some of the cuttings I took earlier this month are beginning to show roots, I decided that I should get a move on and clean at least some of them.  It does not take long and I really don't know why I put it off.  A large bucket of water, a dash of Jeyes Fluid  an old washing up brush, plus Marigolds, and they are soon ready to be stacked away on the shelf in the shed.