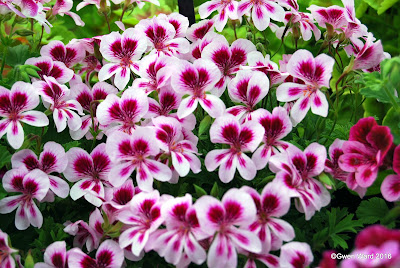 "Charmay Marjorie" an Angel Pelargonium was raised by Ken Attfield of Australia before 1999.   The large flowers are a pale lavender colour with a deep mauve blotch on the upper petals.  It has an upright habit and is short jointed.    Ken named this plant for Marj Edwards, who is another well known Australian Hybridiser.

The weather here is chilly and we have had some very strong winds.   Fortunately only two or three frosty nights, so heaters have not been on often.  A couple of  chilly, frost-free nights I covered the plants over with fleece.      I am still feeding with a balanced feed, but my next feel I will move to half-strength High Nitrogen  to kick start the plants into growth.    Once into March I will revert back to the balanced feel for several weeks.   Some of the autumn cuttings have been potted on, and I still have a few more to do.