I'm feeling quite excited.  You may recall that at the beginning of this year I sowed some pelargonium seed I had saved from last year.  These were all 'bee crosses', i.e. a bee had buzzed from one plant to another in the greenhouse spreading pollen about.   At first I was quite disappointed with the results as most did not germinate.  However I did have three very strong growing short jointed stellars from 'Grandad Mac'.  I have written about 'Grandad Mac' in the past.  It was hybridised by the late Brian West and is a dark peach coloured semi double stellar. The leaves are typically star shaped with  a dark blotch and light green edge.   All of the three new stellar seedlings have the dark blotch of 'Grandad Mac', but the flowers on the first one to flower are double and a bright orangey red.  There is a flower about to open on a second plant and the flowers look as if they will be the same colour.  Of the third, there is no sign of any flowers yet.


Enthused by my success with the 'Grandad Mac' seeds I sowed more seed a couple of weeks ago.  All Angel pelargoniums, but some from a scented pelargonium and also from a Unique.  Only a  few of the seeds I sowed germinated, but those that did are now potted on. By far the strongest looking seedling are those of the Unique "San Francisco". 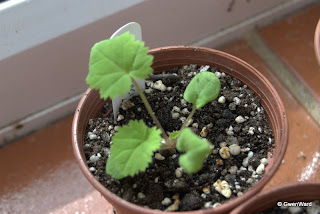 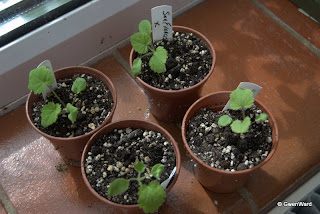