Who is the Pampered Lady? 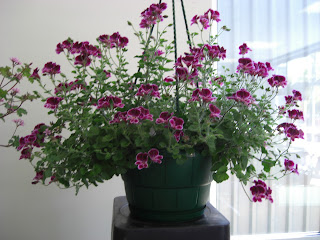 Angel Pelargonium 'Pampered Lady' in hanging pot
(photograph taken at BPGS National Show 2008)
﻿
It's been a busy week, but I managed to get out in the garden on Tuesday morning when we had a mild spell and Brian was out for the day.   I planted the last of the bulbs I had bought just before the last cold spell we had.  I was beginning to think I would have to put them in pots.   I also cut back some of the﻿ old growth crushed by the snow in one border.  It certainly looks a lot better and when we get another mild spell I will be out tackling the other borders.
Posted by Gwen at 21:42