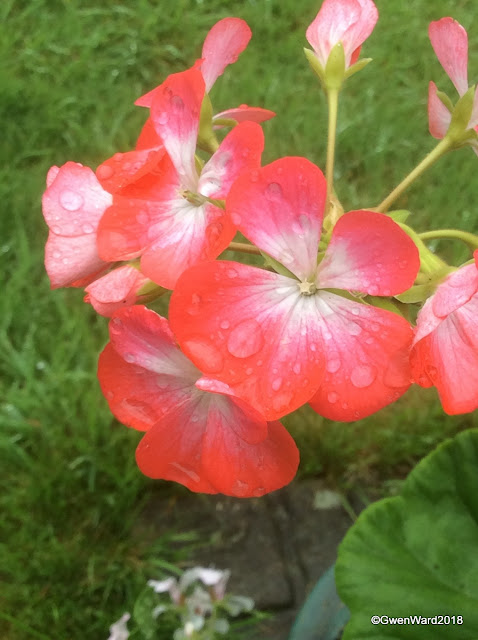 This is my mystery zonal pelargonium.  It is a basic pelargonium with large heads of single dark rosy peach flowers with a central white eye.  I saw this growing in my nephew's garden in Adelaide, Australia, several years ago.  It was growing like a small shrub.  I took a couple of cuttings and brought them home with me.  The plant grows well and it is a vigorous grower.  Each year I grow it in a large planter in the garden.  But I have never known its name. My sister planted it, but she had lost the label and had no idea.  I have asked on one or two Australian Pelargonium Facebook Pages but no one seems to know its name so I just called it "Dales", after my nephew.  There are now several Specialist Australian Pelargonium Facebook pages and a couple of weeks ago I spotted what I was sure was my plant.  I asked my sister what she thought and she confirmed that she thought it could well be the same as my plant as she recognised the name.   So, after investigating a bit further I am now able to put a name to my mystery plant.  She is "Lady of Spain".  This is not a great photo, but I took it to send to compare with the one on Facebook on one of the few showery days we have had this year.  Introduced by Schmidt, USA in 1947.

I see on my last Blog post that I thought life would be a bit easier now, but in fact I've had an unbelievable busy year.  However, fingers crossed, life is slowing down a bit for the time being.  I have been taking cuttings and have sown a few pelargonium seeds.  I'll update you on these in my next post.