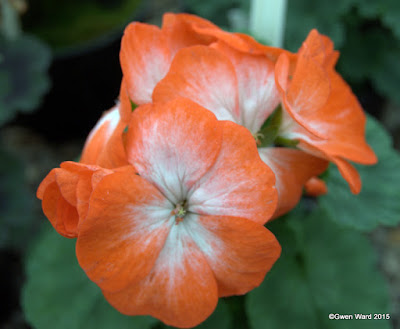 A pretty miniature zonal pelargonium, “Mantilla” was hybridised by the Rev. Stringer and introduced in 1969.  “Mantilla” has single orange flowers with a white eye.  The green leaves have a slight zone.
Several years ago Brian, my husband, who is not a gardener, decided he wanted to grow bonsai trees.  Every time we went to a garden centre he would look at the miniature trees, and often buy one.  We soon had a collection of tiny trees on the window ledges in the house and conservatory (I think he was trying to outnumber my pelargoniums in the conservatory).    As these tiny trees were growing indoors they needed daily misting, so he would traipse backwards and forward from kitchen to sitting room or conservatory to mist his little trees.   Not being a gardener or even, I dare to say, a great lover of plants, he soon got bored of the daily traipse.   So the little trees soon disappeared from our house.  I kept the trays though as I had in mind an idea I had read about – bonsai’d pelargoniums.

Fast forward to last year when I visited Toronto in Canada and the Ontario Fuchsia & Pelargonium Society Annual Show.  They have a class for bonsai’d pelargoniums and fuchsias.    They were all very good, but one really interested me.     It was a bonsai of the scented leaf P.bontrosai – a sport of P. graveolens , and has curly leaves and as a bonsai reminded me of the Japanese Cloud Trees.   So on my visit to Fibrex Nurseries last week I got a small P.bontrosai, found one of the small bonsai trays and potted up the P.bontrosai.    I was enthused to then look for another miniature I could ‘bonsai’ and found a pot bound P. Sandown in a 3” pot.  Then stem had hardened to brown, an ideal candidate.   (I am ashamed to say it was rather old but I have another two growing well).

So, here they are, and I have to say I am delighted with them.  I feel another interest coming on!


If you've grown bonsai pelargoniums, or decide to have a go yourself, do let me know.  I would love to hear about your experiences with these bonsai's.
Posted by Gwen at 11:09