I have had "Little Perky" in my collection since I was given a cutting in 2005.  To say it is difficult is a bit of an understatement.  It has rarely flowered for me, and just sits quietly in the corner of the greenhouse waiting to be watered and fed.    My friend Sandy Connerley, who lives in California, says her plant of "Little Perky" lives happily outside all summer and has plenty of flowers.  I tried putting my plant outside a couple of summers ago, but it sulked and drooped, so it went back into the greenhouse.

Having this year decided that I really must thin down my collection and get rid of 'non-performers', I told Derek Lee, Friend of the National Collection of Pelargoniums at Fibrex Nurseries,* of my decision, and mentioned that "Little Perky" was one that would be going.   "We don't have that in the Collection" he said, so I told him that I would give the Collection my plant.   Of course, this year "Little Perky" has decided to flower. 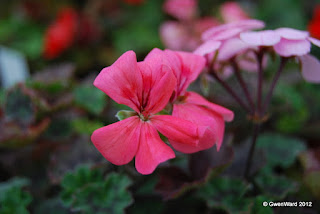 "Little Perky" is a miniature hybrid Ivy Leaf Pelargonium, hybridised by the late Brian West and introduced in 2001.    It is a cross between "Vectis Cascade" (Single, Lilac Ivy leaf, hybridised by Brian West) and "Shelley" (Single Dwarf Zonal hybridised by Ray Bidwell, large white flowers splashed and striped red. Dark green zoned foliage.)  The single flowers of "Little Perky" are a delicate pink with just a hint of the usual pelargonium feather markings on the top two petals.  As the flowers age the colour fades to a paler salmon pink.  The leaves are small and dark green with feint zone. 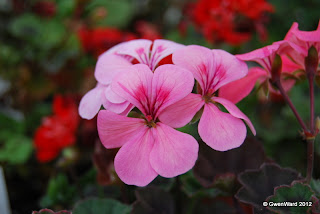 I took four cuttings a couple of weeks ago and none have survived.  So "Little Perky" is still being difficult, but I will keep trying.