An Angel Pelargonium - but not as we know it!

Last spring a friend of mine gave me three small cuttings of the first double Angel Pelargonium  Quantock Double Dymond.    Two of the cuttings rooted well and grew into good plants. When I left for my trip to America at the end of June both the cuttings had buds, although one of them, I thought, looked a little strange for angel pelargonium buds, but as this was a new type of Angel, I thought no more of it.  When I got back from America one of the small plants had already bloomed, and I was only able to see the 'tail end' of the flowers.   The other plant still had decidedly odd looking buds which did not seem to have grown very much at all.   As the months have gone by these odd flowers have grown longer and longer with no petals to speak of, and remained a green/brown colour. 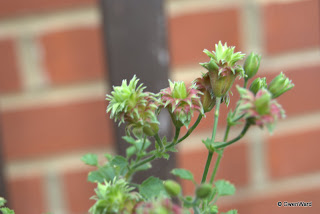 This plant seems to grow exactly as you would expect an Angel Pelargonium to grow, apart from the very strange flowers.  Quite attractive in an odd sort of way, at the moment.  However, I understand the flowers become very elongated in time, as can be seen starting in the second photograph below, and I don't think this will hold much attraction. 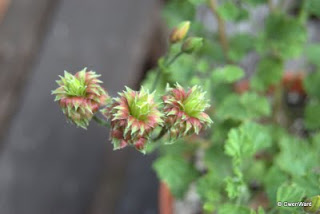 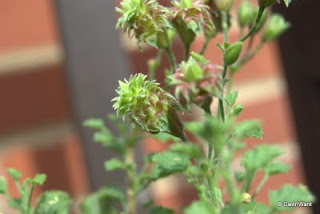 Below are photographs of Quantock Double Dymond and Quantock Ultimate which are reproduced by kind permission of Helen and Mark Bainbridge of Fir Trees Nursery, Stokesley, N.Yorkshire,TS9 5LD - www.firtreesnursery.co.uk
﻿﻿

Ken Dymond hybridises many wonderful Angel Pelargonium with the prefix "Quantock" after the hills of the same name in the English County of Somerset where Ken lives. However, Quantock Double Dymond is the only Angel Pelargonium with the pre-fix 'Quantock' not hybridised by Ken. It was found as a sport growing on another of Ken's hybridising ' Quantock Ultimate; and was named by the nursery in Ken's honour.
Ken has written a booklet, entitled "A Personal Guide to Growing and Exhibiting 'Angel' Pelargoniums".  In his book Ken explains how he came to hybridise pelargoniums, with tips on exhibiting and growing pelargoniums, coloured photographs of many of his raisings, and personal anecdotes, as well as the 'family history' of Fir Trees Catkins.  This excellent little publication is available for only £4.00 which includes post and packing (and, Ken tells me, autographed as well!) and can be obtained from Fir Trees Nursery, address as above, or from Ken himself.  If you email me (gward28@gmail.com) I will let you have Ken's address.
Posted by Gwen at 10:59