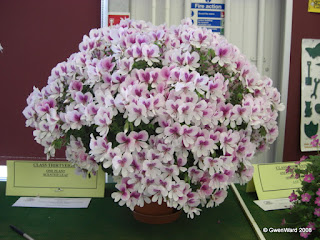 For growers of pelargoniums, 'Imperial Butterfly' is one of the best.   It has large white blooms with maroon feathering on all petals.   The leaves have a slight lemon scent and is listed under 'Scented Pelargoniums' in the catalogues.   It was hybridised by Gwen Dodge who crossed a 'Prince of Orange'  (a scented leaf pelargonium) seedling back to its parent.  Ken Dymond, well know hybridiser of Angel pelargoniums, told me that 'Imperial Butterfly' was first exhibited at the Portsmouth Club Show which was being judged by the late Peter Godwin, for many years President of the British Pelargonium & Geranium Society.  John Thorpe's nursery introduced 'Imperial Butterfly' in 1989 as an Angel Pelargonium, but when he discovered the breeding he said it should be listed and exhibited as a Scented Pelargonium.

My photograph was taken at the last B.P.G.S. show at Capel Manor and was first in it's class for scented pelargoniums.  I think it was probably grown by Ken Abel.

Anyone reading the comments on my last blog ('Carolyn's Citrine') will have seen that Ali of http://alithefrog.blogspot.co.uk/ awarded me the following award:- 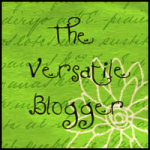 Thank you very much Ali.


Now I have to tell you seven 'interesting' things about me:-


1.  I have two greenhouses filled with pelargoniums of all types
2.  I share a half size allotment with my younger son
3.  My three sisters all live in Australia
4.  I am Show Secretary for my local Gardening Club
5.  I like to cook.
6.  I love reading, particularly crime novels
7.  I am membership Secretary for The Pelargonium & Geranium Society


I award the Versatile Blogger award to the following Blogs