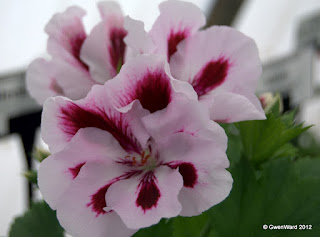 Regal 'Doris Shaw' lives up to the name 'Regal' with large blooms of pale mauve with violet markings.

It was hybridised by the late Hazel Key of Fibrex Nursery and introduced in 1973.

After the freezing weather we have had recently, it was nice to get out into the greenhouse this afternoon and pot on the remaining surviving cuttings I took about six weeks ago.  For some unknown reason, most of the cuttings I took, about 48 of them, just flopped over!  They all seemed to be doing so well, but suddenly they weren't!  The ten or so that I have left have very strong roots and I am sure they will now be fine.

I have had a few losses over the winter.  Oddly these are  mainly in the greenhouse that has electric heating.  My next task will be to have a good clear out of the plants and take cuttings from them if I can.

Other losses I have had were the cuttings I took in late summer.  All potted on and looking good.  Then I knocked against the tray they were in and tipped them all over the greenhouse floor.  There was soil, cuttings,  pots and labels scattered all across the floor.   Some of the cuttings I recognised so was able to pair up plant and label, but the others I had no option but to put them in the compost bin.   What a shame.
Posted by Gwen at 16:33