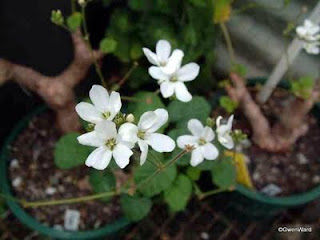 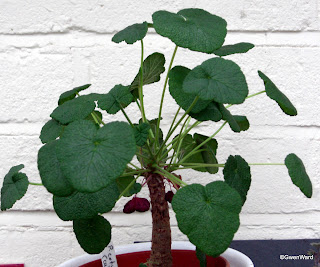 The flowers on my plant of P. cotyledonis are just going over, but it has been in flower for the past month.    Pure white flowers with regular shaped petals, and heart shaped leaves which are glossy and heavily veined.    The stem and branches are thick, stubby and covered in brown stipules.  The last picture shows my plant two years ago last August.  You will see some of the lower leaves beginning to die off.  Eventually they all turn a reddish brown and fall.  The plant is dormant over the winter months, just a stem with branches.  About six weeks ago I noticed buds on the ends of the branches.  Now the flowers are going over, I can see signs of new leaves.

P. cotyledonis was introduced to Kew in 1765 by John Bush.  It is endemic to the rocky cliffs on the island of St. Helena in the southern Atlantic.   It was, at one time, almost lost due to wild goats roaming the island.  Fortunately Kew Conservation unit is halting this decline.   Known as 'old man live forever' P. cotyledonis is unique, having been separated geographically from the rest of the genus and has had to adapt to the conditions on the isolated St. Helena.
Posted by Gwen at 21:29